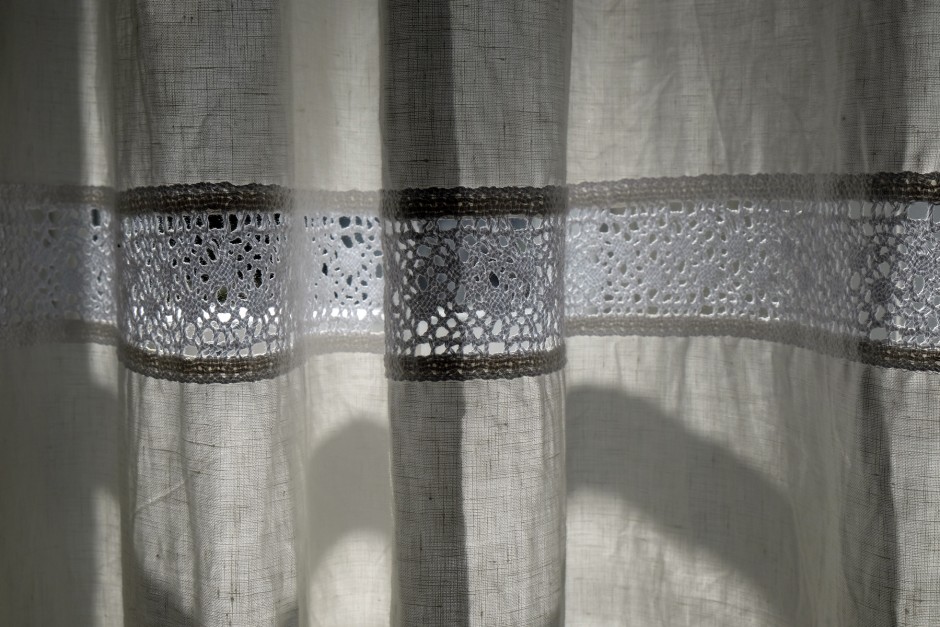 The Tyrolean spa town of Meran, part of Italy since the post-WWI carve-up of the fallen Austro-Hungarian empire, was, a century ago, the hot destination of its day, a leafy Hapsburg Shangri-La teeming with poets, royalty, adulterers, gamblers and the convalescing. Visitors came for the opera, the mild climate, to take the waters and stroll its rambling walks, and included a young Sigmund Freud, an ailing Franz Kafka and Sissi, the beautiful, eccentric Empress Elisabeth of Austria. Traditional Mittel-European hospitality still flourishes here today, as does the city’s modern mineral spa and a wider culture of wellness. A five minute stroll from the river and the porticos of the historic centre, Ottmanngut manages to be both comfortably urban and delightfully bucolic, with a soundtrack of birdsong and a stage set back drop of terraced vines, gardens, palms and circling alpine peaks. Nine airy rooms each have a distinct personality, full of beautiful objects and furniture and playful references to the house’s long history. As variously a home and a hotel, Ottmanngut has been in the hands of the Kirchlechner family for a number of generations. We talk to Martin Kirchenlecher who, along with his brother Clemens, have reimagined this precious family home into a thoroughly 21st-century guesthouse.

The house has a long history, exactly how old is it?

The house was first mentioned in 1290. It was one of the first houses in Merano, surrounded by green, a normal farmer’s house. Through the years people began to grow grapes behind the house and with the grapes and the wine there was added a Buschenschank – a simple cellar door – where you could eat and drink the local products. The Buschenscank gradually became a proper restaurant and in 1854 the first guests lodged at Ottmanngut. Since then it is a guesthouse, with some short breaks.

When did the house pass to your family?

In 1850 it came to our family, my great-great-grandfather bought it as a holiday home – he only lived fives minutes away in the center of Merano, but Ottmanngut was outside the town wall and still surrounded by green fields. Before he bought it he had come to visit and rest in its garden, he enjoyed the Mediterranean feeling, the citrus fruits and palm trees. In 1850 he fulfilled his dream and bought it: he immediately went to work and the guest house had its beginning. 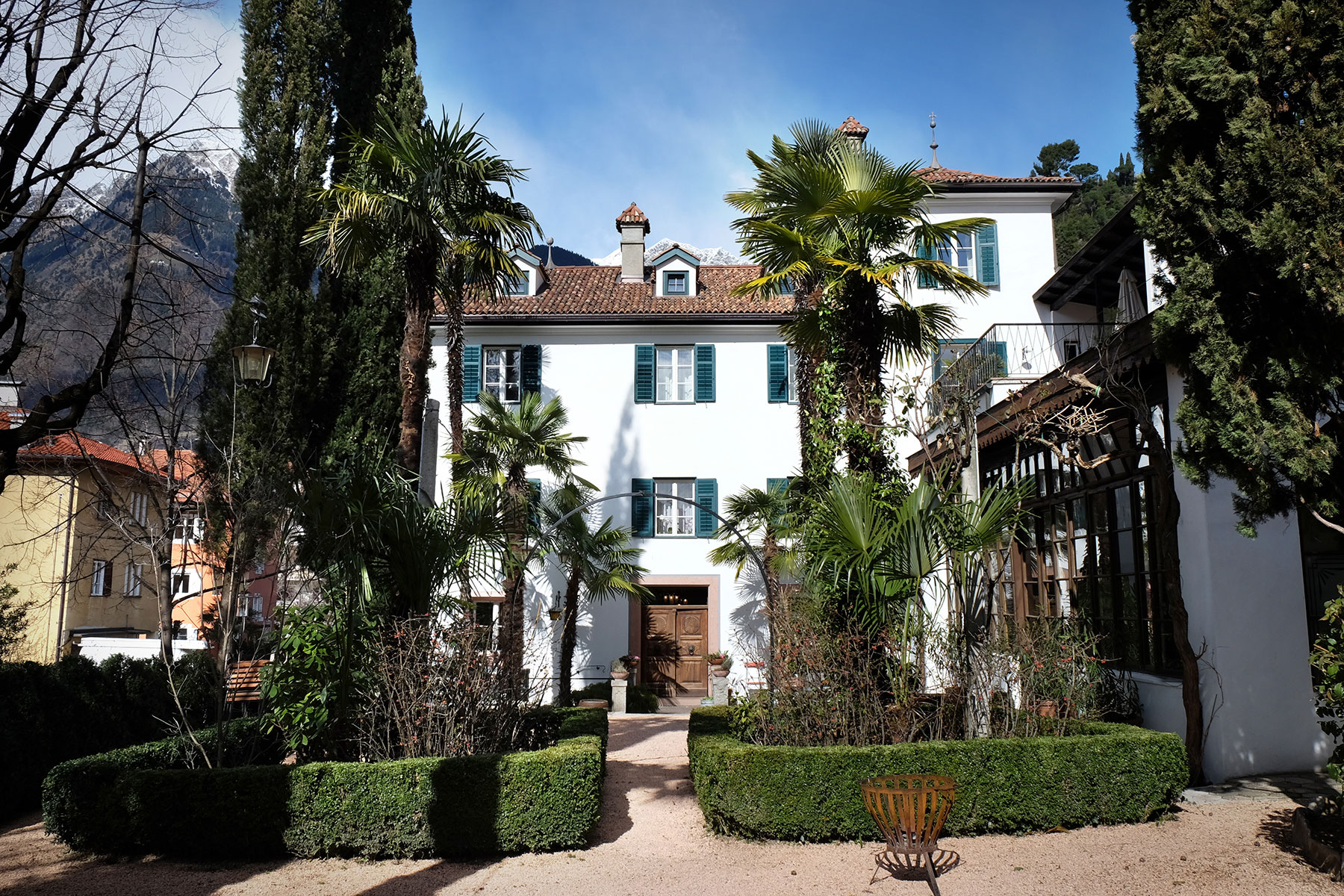 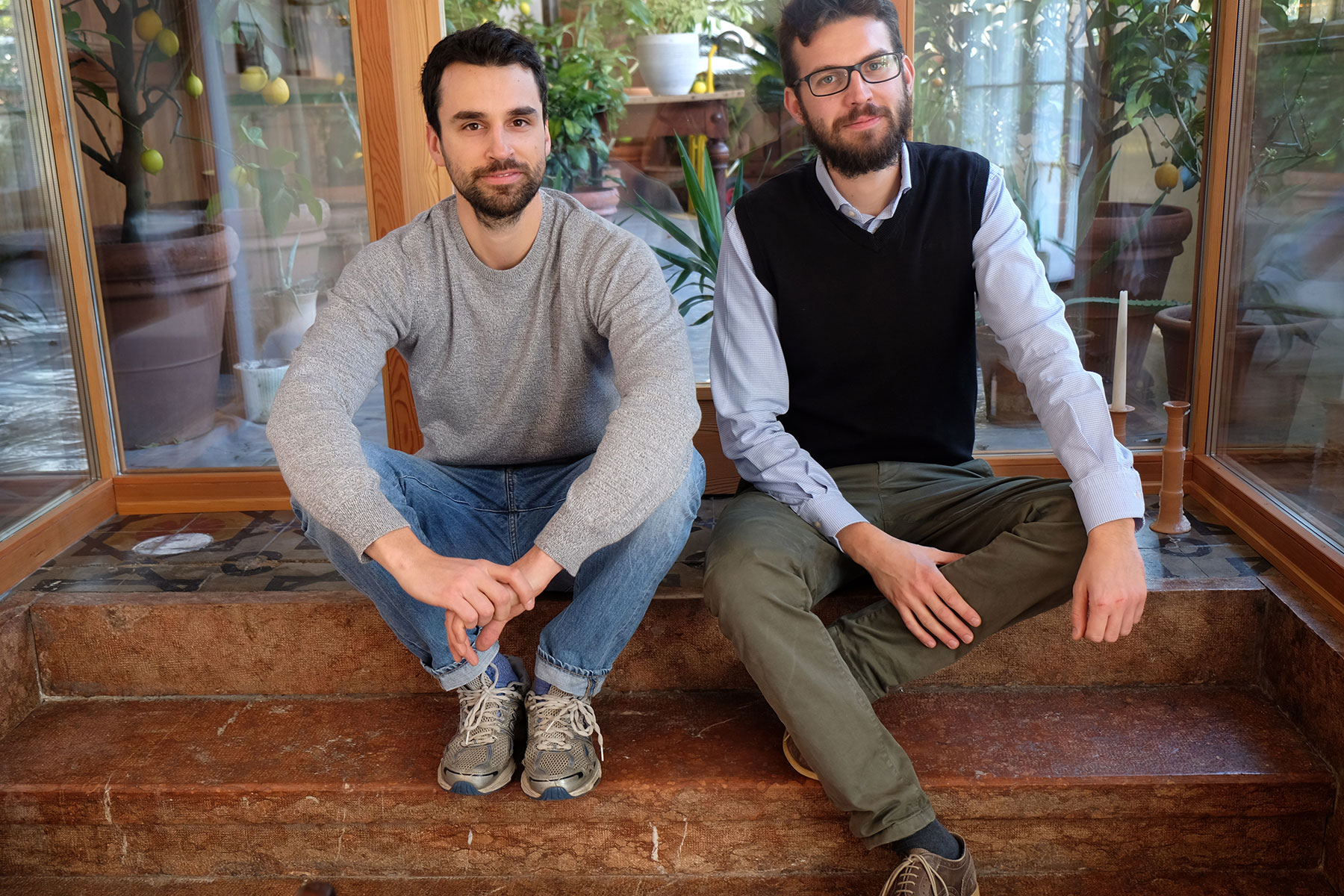 What happened in the 20th-century?

The golden era was in the 20s, with dance evenings concerts and much fun, between closing for both world wars. My grandparents renovated in the 1950s and 60s and after my grandfather died in 1983, my grandmother had to manage the whole house by herself, even cooking three times a day for over thirty people. In the 90s she stopped cooking but still managed the house as a B&B until 2010. She was 82 years old.

How did you and Clemens come to take over?

We knew something has to happen as my grandmother couldn’t run the B&B anymore. We thought about apartments but came back to keeping it as a guesthouse. At the beginning we just wanted to bring it up to a better state, add bathrooms, heating and so on. But during the renovation there was this passion for house itself and the gastronomy growing in me and us all. The most important thing for us was to be real and authentic. We wanted to rebuild this old bourgeois house and to also have the possibility to live there without having to disguise or to play-act for the guests. We wanted to be ourselves, we wanted to live and work as we live and it to be our house like it always was.

You studied landscape architecture in Vienna, but you’ve ended up as a hotelier…

But it was a big surprise for me to become a hotelier, and now I’m very happy with it.

Did you have a design vision from the start, or did it evolve organically? I’m particularly fond of the way you use fine pieces and the vernacular together…

This is the great work of my father. He has been interested in antique interiors since he was 16 years old. Before we started the renovation he already had in his mind where each piece would go. The combination of his passion and almost scientific understanding of the old interior along with the ideas of my brother, me and other family members made the mix which you now find in the house. 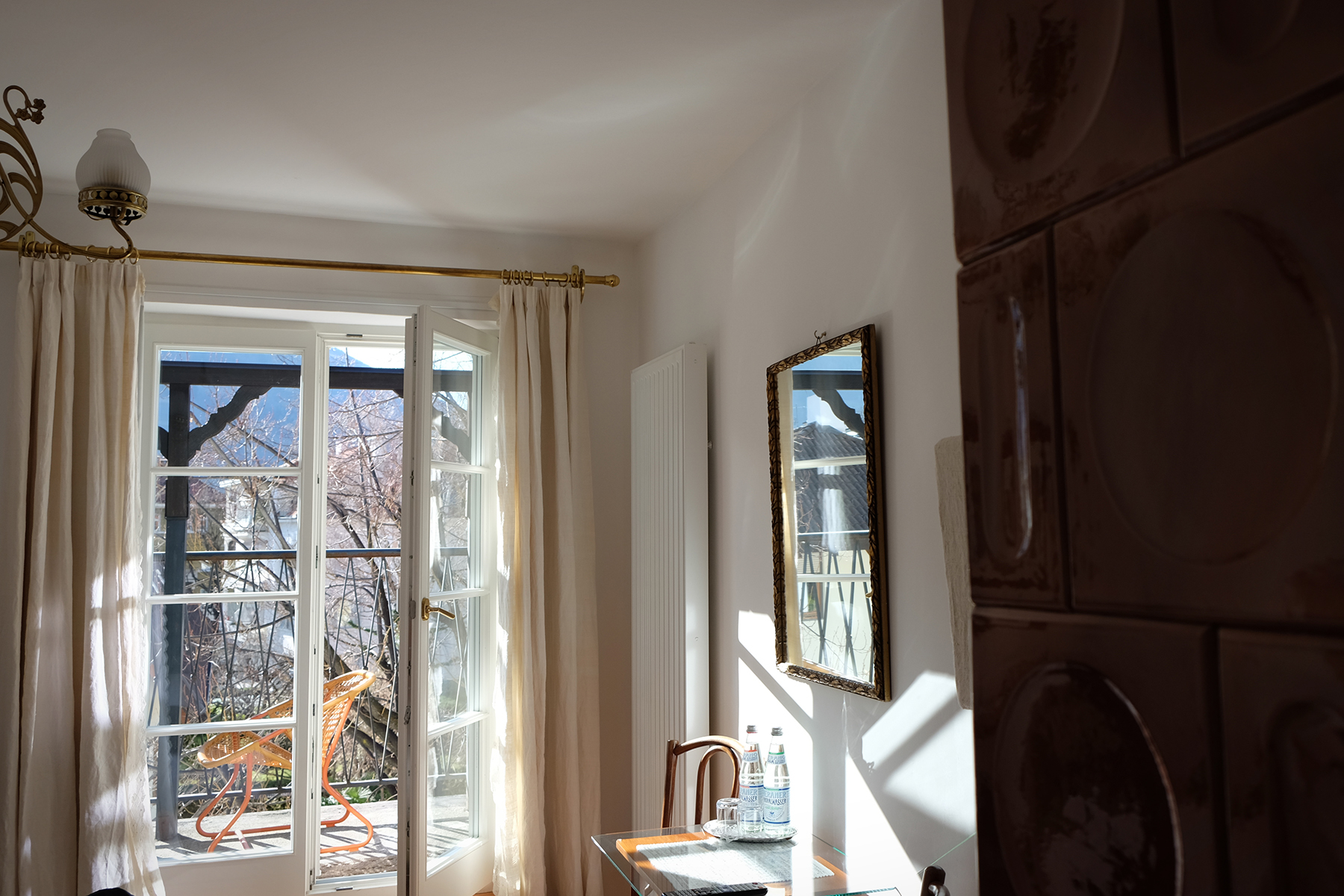 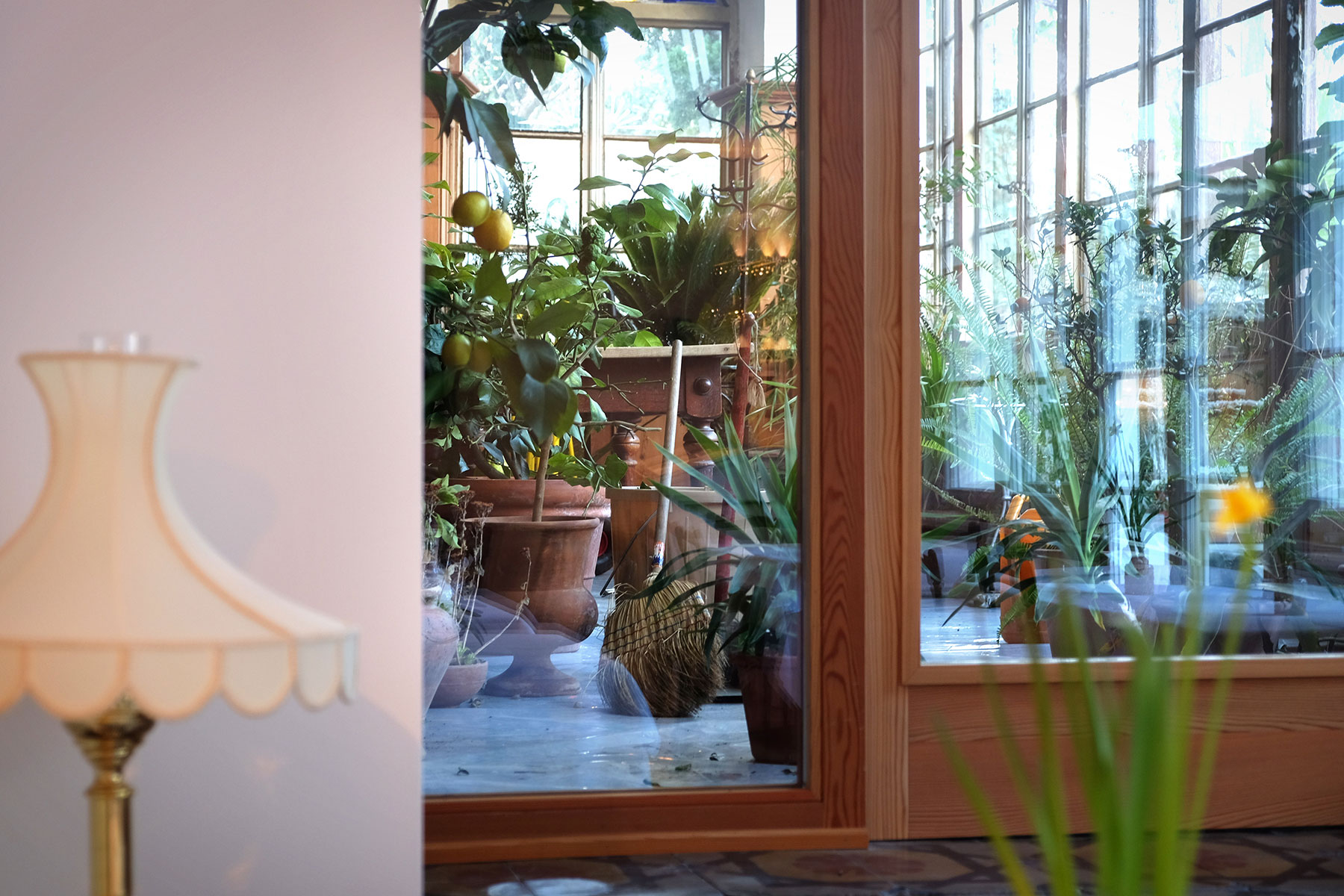 The furniture and objects are a beautiful mix, as you say: the elegant solidity of the late 1700s, the self-confidence of the Biedermeier style, the harmonious fluidity of Jugendstil and very nicely considered pieces of contemporary design…where did your source everything?

It’s mostly family furniture, which had been in our cellar, or in our apartments. The rest came from friends, relatives and a few things from flea markets. The chairs in the breakfast room come from an old restaurant in Merano: interestingly, enough my Grandmother lived there as a child.

Your grandmother was also involved and still lives in the house, right? What was her reaction to the renovation?

She was very happy and satisfied about the fact that we continue to manage the house. There were only two things she didn’t like: the green doors of the daytime toilets and the austere stone wall in the Mitzi Martha room.

How did the name come about for the Mitzi-Martha suite?

About 120 years ago, two German actresses – Mitzi and Martha – lived in that room. If walls could speak…

You still have the small vineyard, what kind of grapes are grown there? How much wine do you produce?

We have Vernatsch, Lagrein, Nebbiolo and a little bit of Cabernet. We produce about 400–500 litres a year.

The garden is exquisitely pretty and so evocative of the town, was this designed or is it the original? How old are the palm trees and where did they come from?

The garden is like it always was. The palm trees are more than 150 years old, we don’t know it exactly. The biggest ones were a present from the church next door, when they grew too big to fit there. 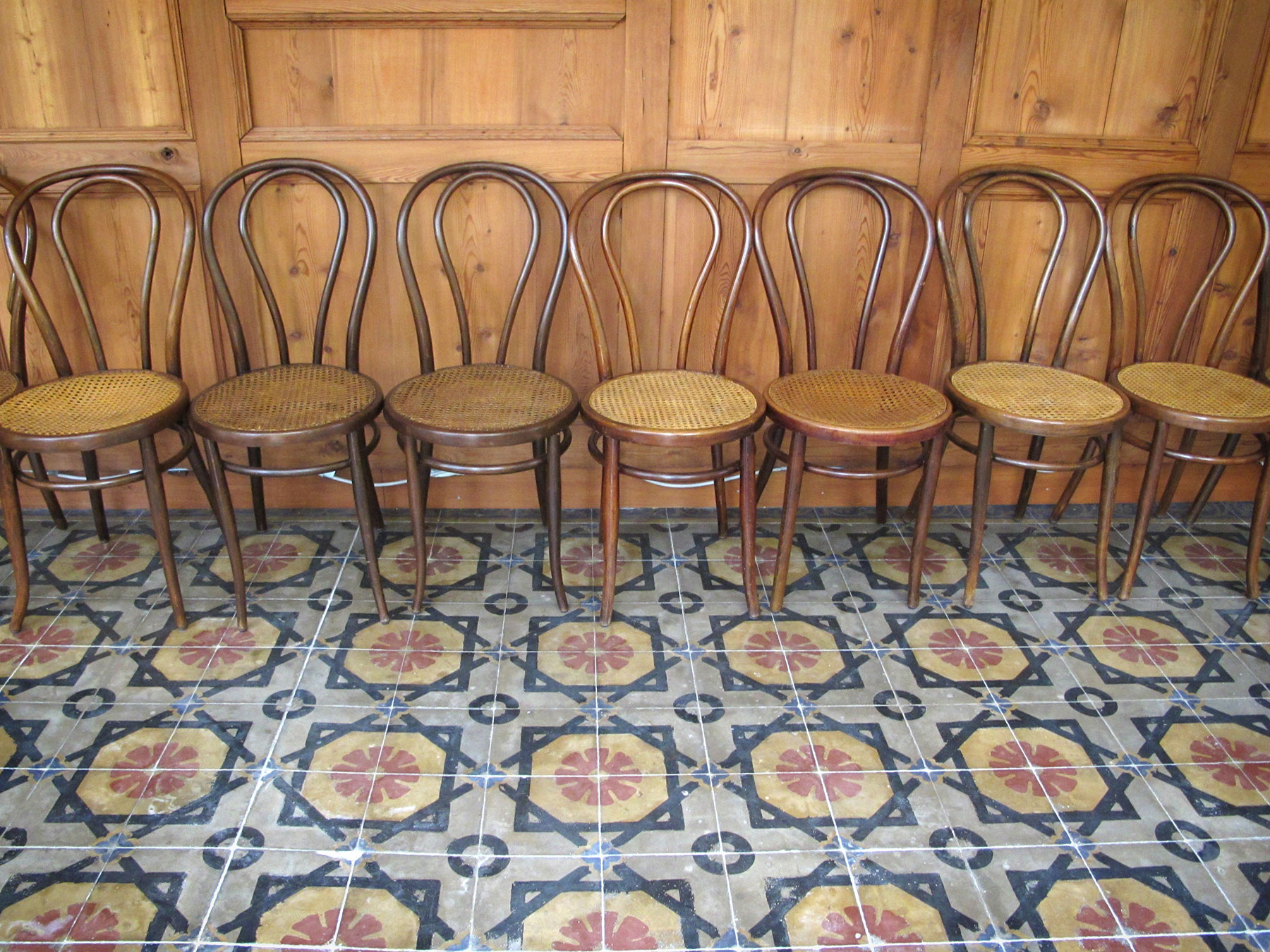 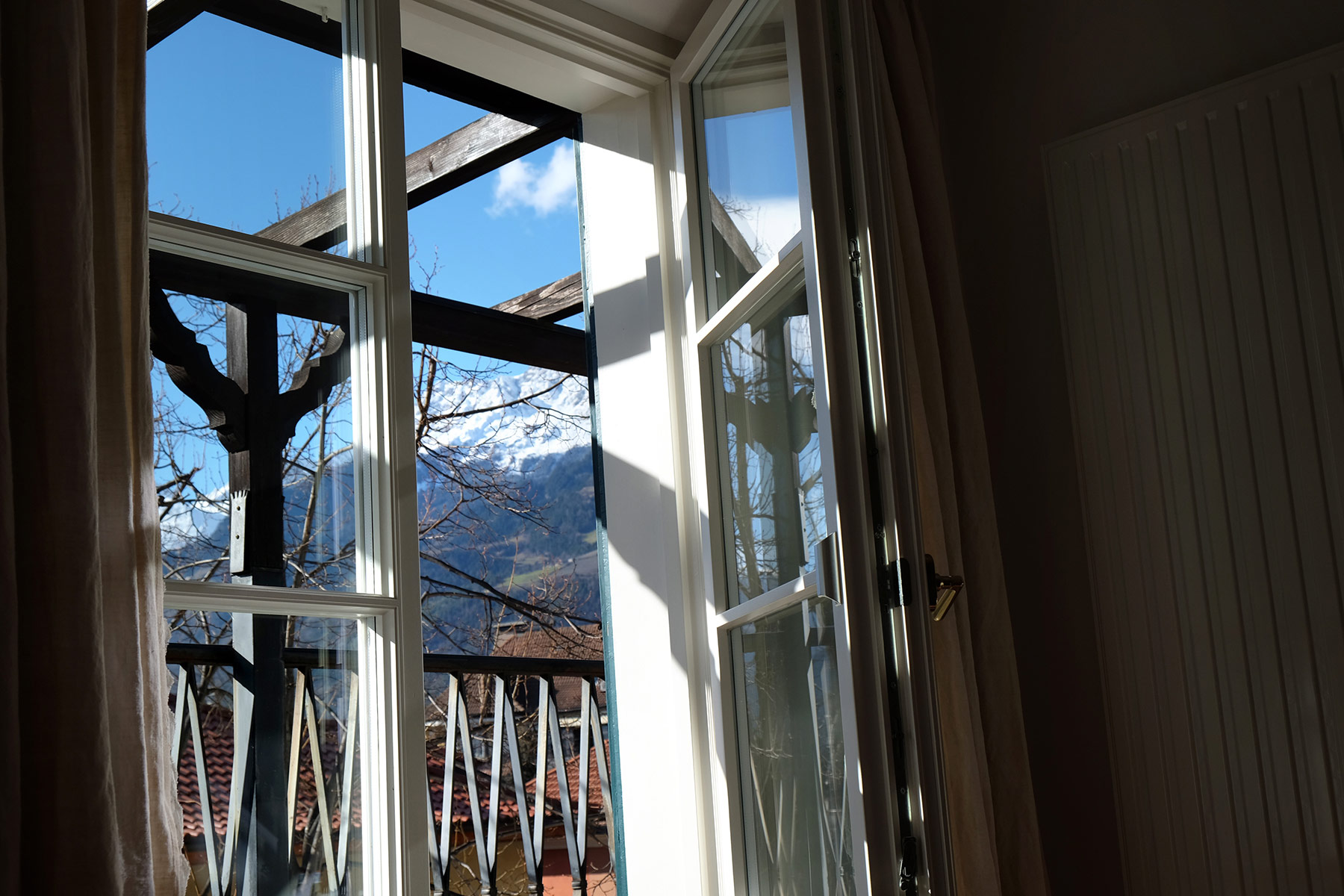 Your breakfasts are wonderful – such fresh combinations of flavours, so visually seductive and fresh – can you tell me a little bit about how this came about?

We started with a small but high quality breakfast buffet. We tried to make every day an amuse bouche for breakfast and used only handpicked products – very local, totally seasonal – just following the spirit of Slow Food. Nevertheless, we were not really satisfied. We had to throw away a lot of stuff; we used too much meat and so wanted to reduce that. We wanted to try some things out, to experiment a little. When there was just a few guests, we served the breakfast and it was really nice. At the beginning of 2014 wsa the moment when I thought we have to change, it has to be possible to serve the breakfast for a full house as well. And we tried that. It was a great success. Now we have a served breakfast, but not A la carte – still regional seasonal and following the spirit of Slow Food. The guests have to let us surprise them a little bit. It’s an everyday changing, but fix menu. It always starts with a base of bread, croissants, juice, butter and different homemade jams. Then we serve our guests a Müsli which we mix ourselves, with fresh fruit or compote, depending on the season. Then a salty dish and sometimes a sweet dish at the end. Now the breakfast has the right importance as in the name Suite & Breakfast mentioned.

The coffee is also great, which isn’t always a given in hotels, even though we are in Italy!

Going for a run at the Tappeinerweg trail above Merano (a walk is fine as well). I also like walking around the older, medieval part of the town center – the Steinachviertel with its small houses and shops, this would be the best place to develop an alternative neighborhood! Two very nice things in this are the Ost West Club, a very alternative club with two concerts a week and exhibitions, really small but authentic, and Offizin S, an old book printer shop.

Another really great walking path is the Sissi path which guides you from the end of the Tappeinerweg to the Trauttmansdorff gardens. You’re going through Obermais and you pass by old historical villas and beautiful private gardens.

Merano has so many hotels and a handful of very beautiful ones, but yours is totally unique… do you think that it may change the way people view the destination?

I hope so, there is this feeling that Merano is getting a little younger, and we seen much younger guests coming to us. I hope this trend will go on. That would be a great chance for Merano. 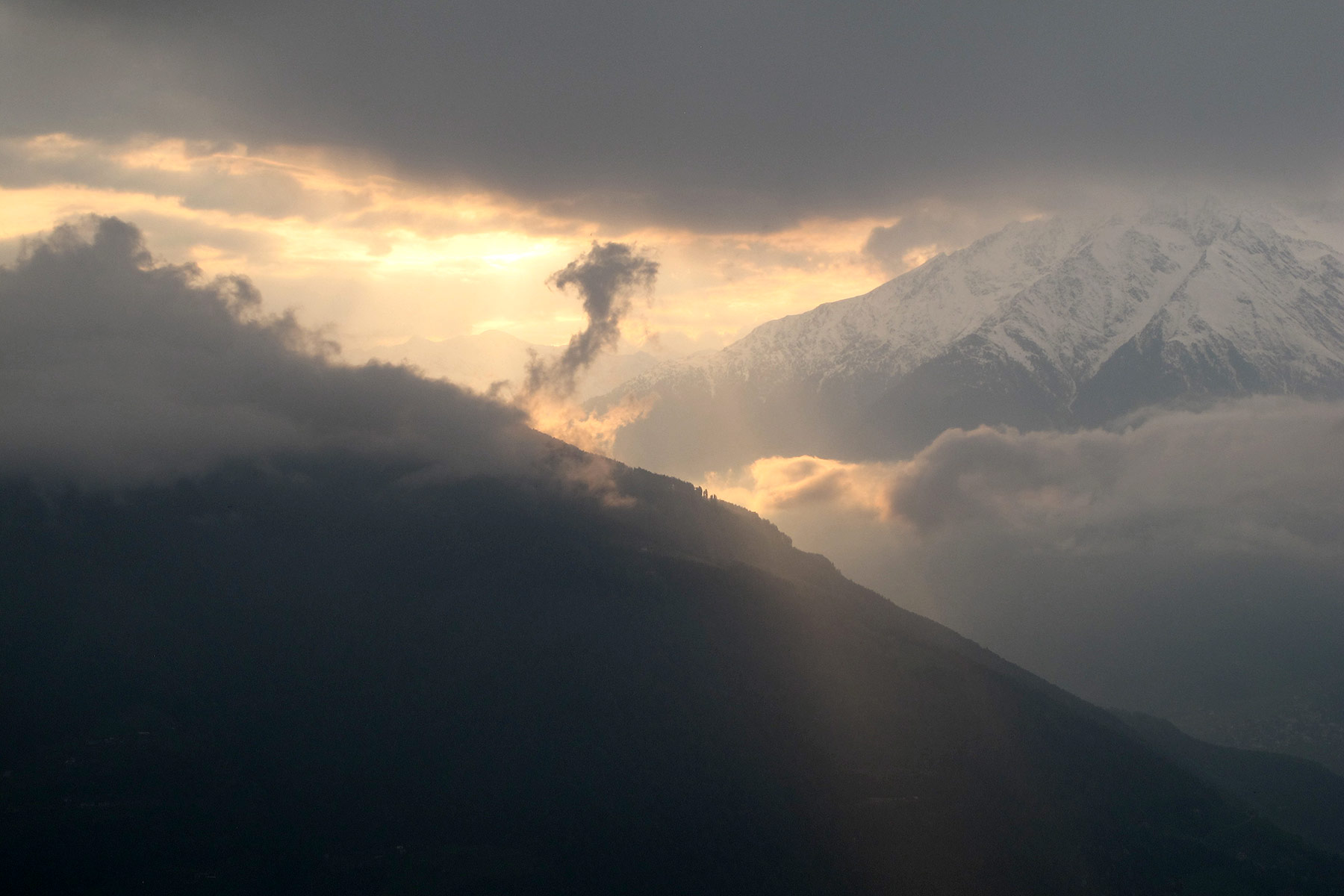 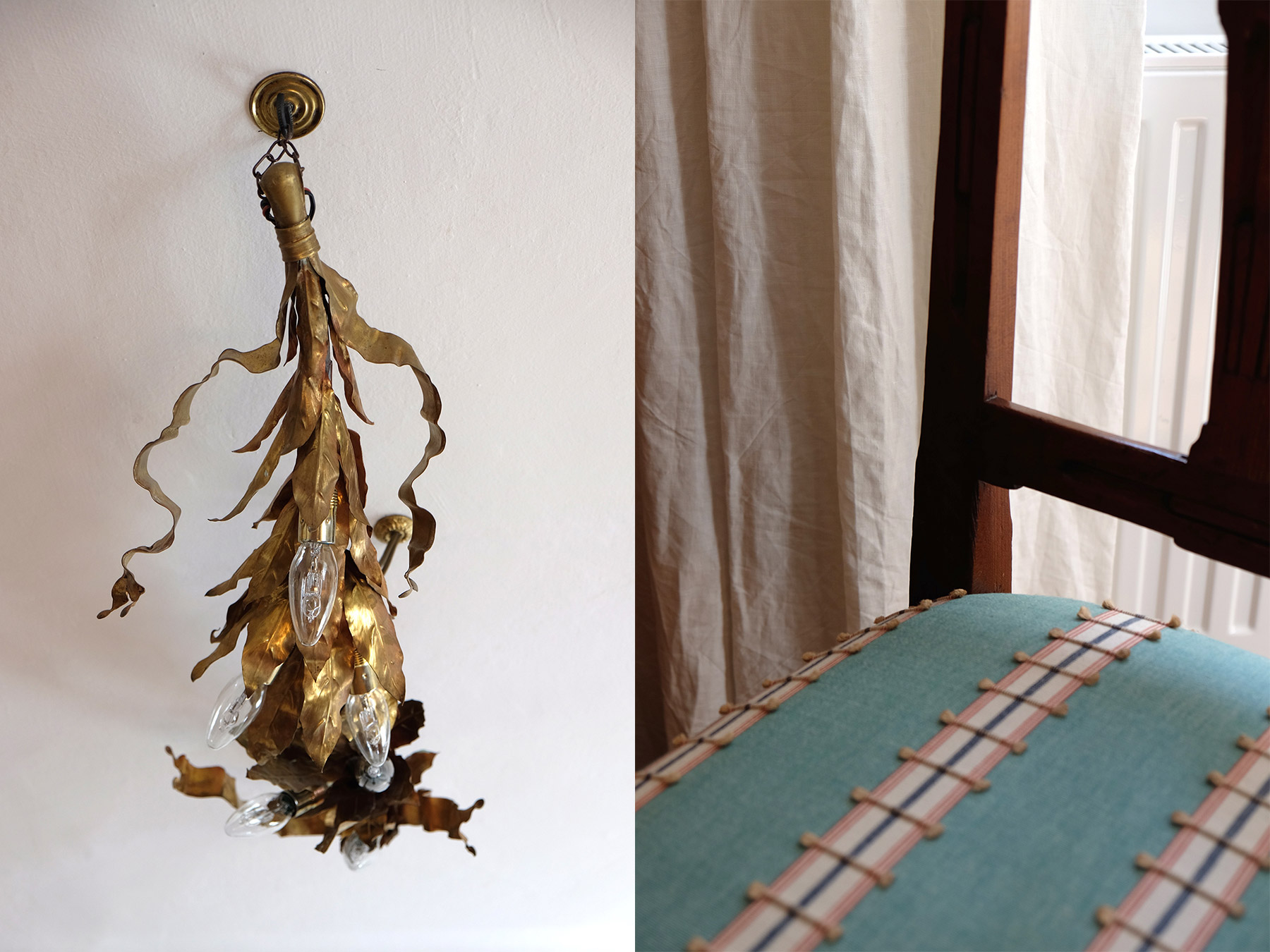 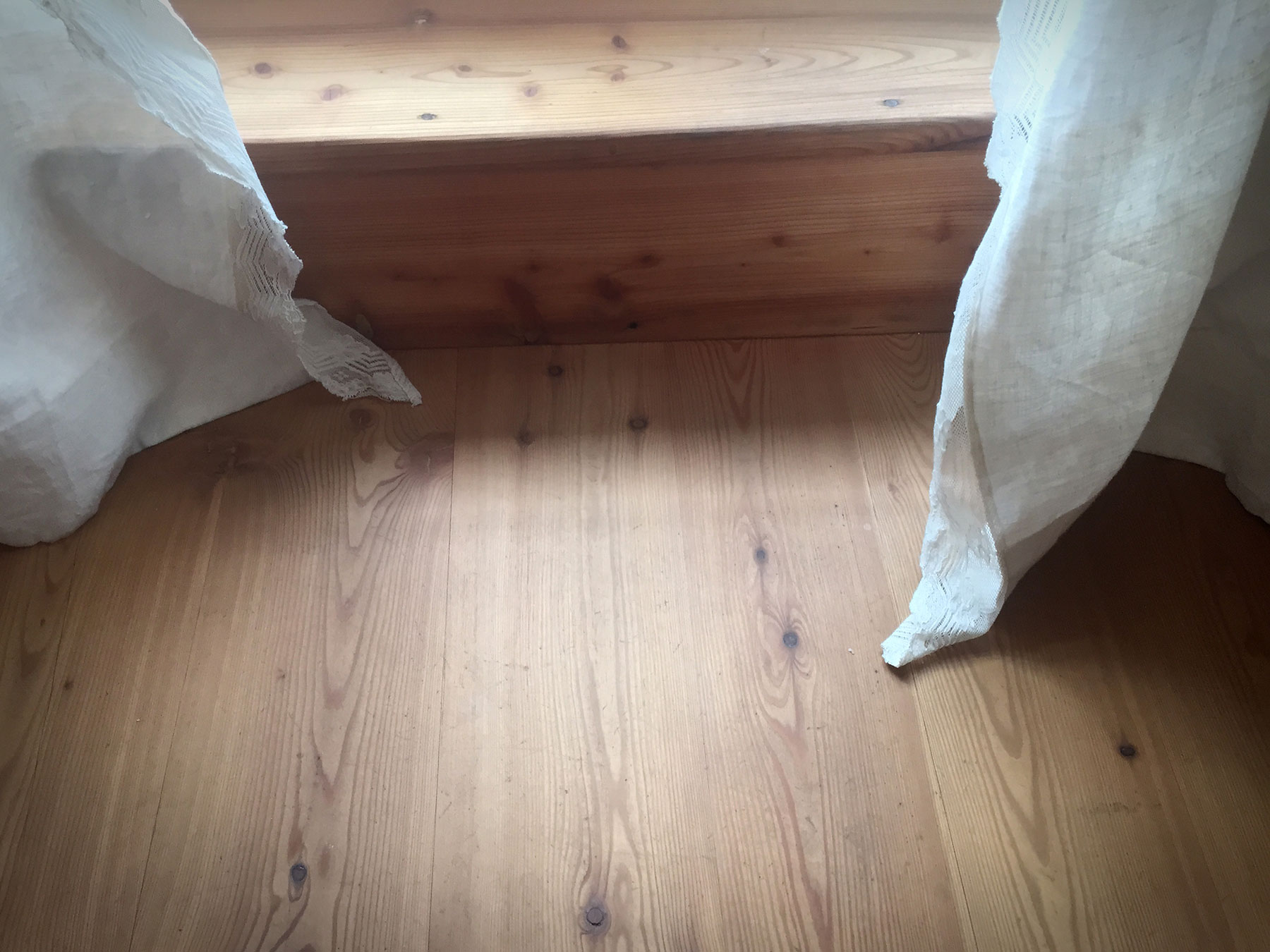 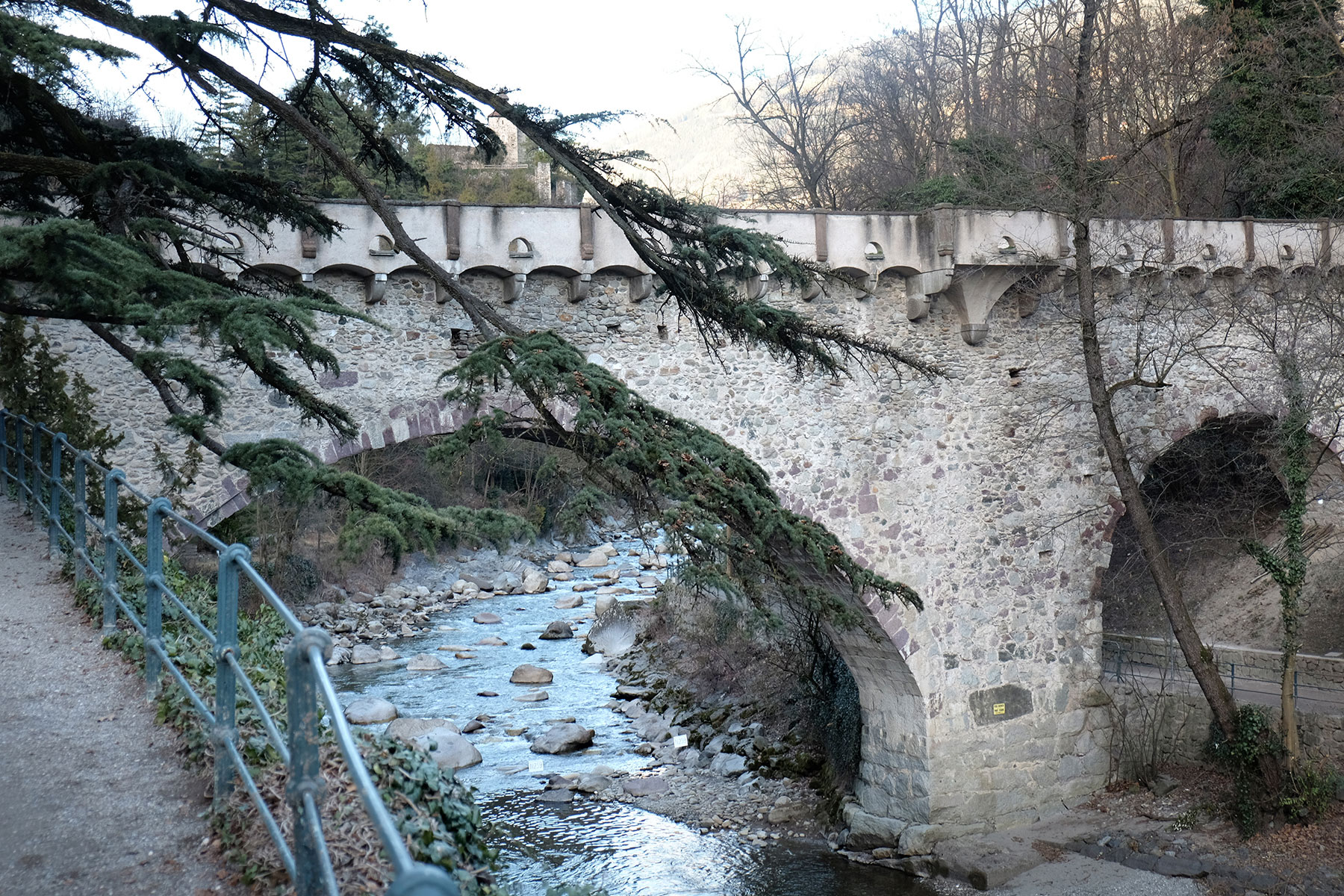